So after working on colouring the Adventurers I once again had a "side project" call my attention away for a bit. Yep, I had a 3 page Bolt story in mind that I wanted to draw myself as it had rainy night scenes I really wanted to try my hand at. I'm really happy with the result and I think panel 1 may be my favourite panel I've drawn. Of course it blew out to an 8 page story but it's finished now and ready to be part of our 5 year anniversary issue of Bolt Comics Presents. This issue is going to be huge! Containing stories with every lead character including the return of The Adventurers in colour! Stay tuned to hear about our next Kickstarter. Meanwhile I have some behind the scenes process details in our newsletter: www.tinyletter.com/BoltComics

The Adventurers Comic in colour! 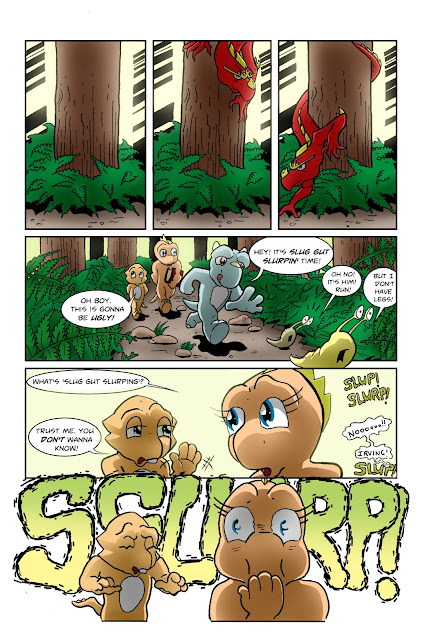 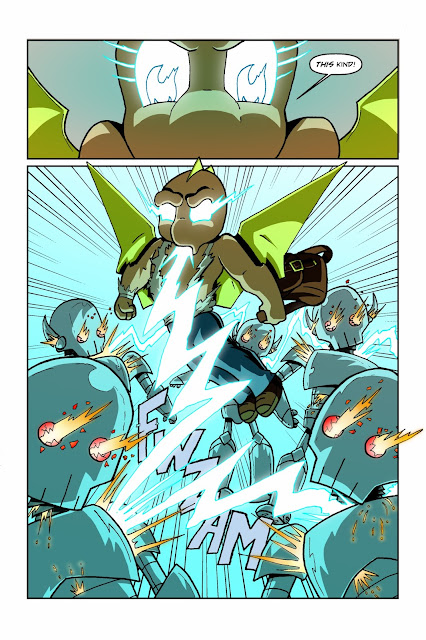 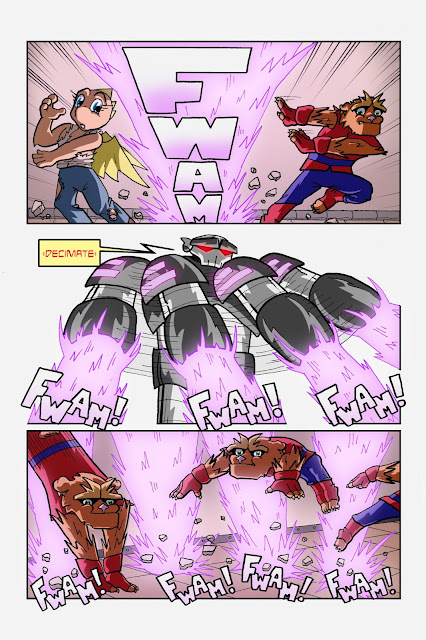 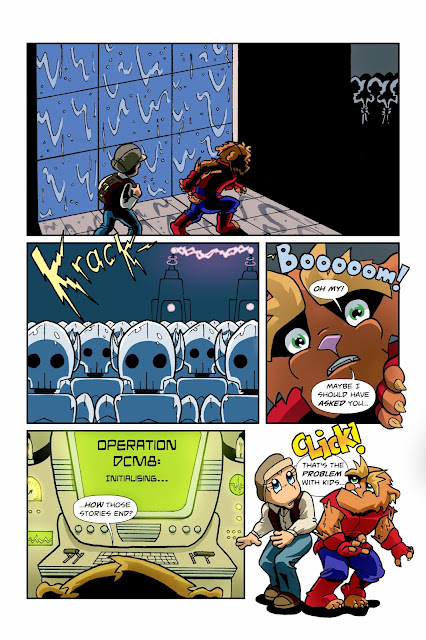 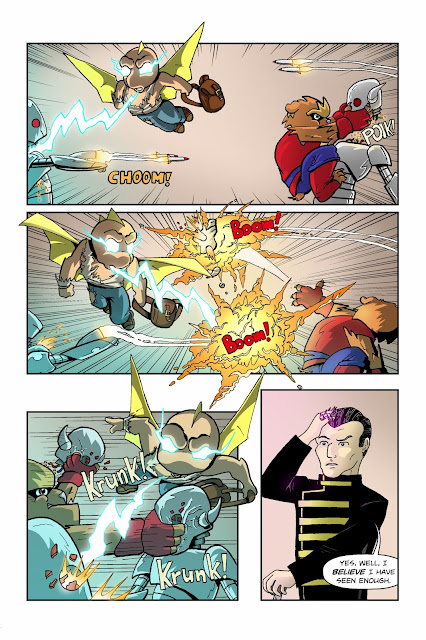 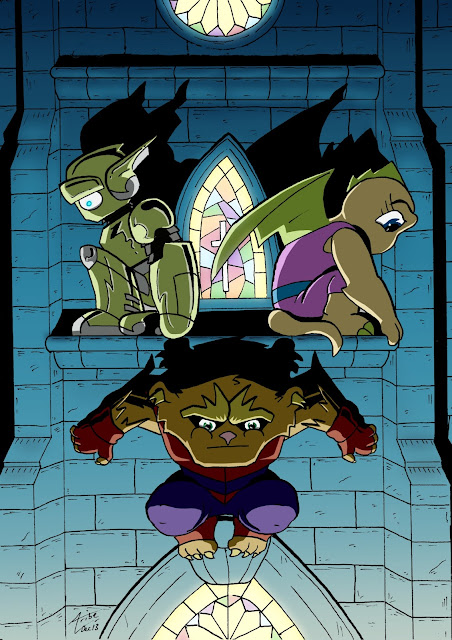 Here is a selection of finished The Adventurers Comic pages coming soon to Bolt Comics Presents! What a journey it has been to get to this point and a lot of it has been recorded in this blog but it's time to change things up a bit and let the art do the talking now.

If you want to keep up to date with work in progress, all things Adventurers and Bolt Comics I'll be posting a regular newsletter. You can subscribe here.

Thanks for reading and I hope you continue to join me for the next stage of the journey.- Andrew Tribe

Woah, panel two is so full of random nineties kitch! This page also has some more of what I would term graphic effects. It's also about 2 or 3 pages squeezed into 1. Here is the only time in the original story that the reporter ( She is given the name Wendy Winters in the new version) is seen, though her prior bad experiences with The Bolt are shared through some hasty exposition. I believe her head piece was originally intended to look like an "Electra" style head wrap but looked more like bandages hence the idea of a back story where the Bolt had fallen on her somehow. I like the newspaper headline as a finishing touch. It was left out of the remake due to page count, deadline, wanting the story finished or all three.

The Bolt leaves Timberr's dignity intact in the remake but his heart shaped boxers still end up on display. The remake also shows the chainsaw actually destroyed by the fall. I guess Bolt just carelessly dropped it. Lots of homages to the original story in these panels including the sound effects panel. The whole thing was an exercise in producing a comic completely digitally for the first time. Some of it I still feel is as cringe worthy as the original but it was definitely a very worthwhile learning curve particularly learning about colouring which as stated in an earlier post, is a whole new ball game for a .

So there you have the Electrifying Bolt fly's again with help from Michael Stoneburner providing a new script. Hopefully there is not a remake of the remake in another 20 years but I'd settle for a animated series or movie. Hollywood? Hello? Anyone?


This original page really highlights how you can cram too many of your influences into one page!  Among the 90's greats that are all being emulated (not very successfully), This page is very much a tip of the hat to Larry Stroman who incorporated a lot of abstract geometric shapes and lines into his comic art.

Panel 4 on page 9 is actually a favourite of mine. It's not dramatic or particularly cool but it is a time when I just let the drawing flow without overthinking it. In my opinion it has a bit more of a "Style" than the other panels.
Posted by Unknown at 03:37

What a hectic year 2016 was! Hence a big gap between these instalments of side by side or "Why am I showing you this?'

Once again the new version is a little extended with poor Bolt getting another whack for his "witty" remarks. In the original 4B2 (as he was then known) mysteriously spins the Bolt's energy "thingos" into energy balls. I went with a bit more hi-tech approach for the remake. Not sure that it was the right choice.

New improved dialogue provided by Michael Stoneburner. His version of Bolt has a lot more confidence than the original ... or is that overconfidence? Tune in next time to find out!
Posted by Unknown at 02:13

The villains original name was 4B2, inspired by the way a certain family member would say 4 by 2. unfortunately in the UK and America it's 2 by 4. So we went with Timberr instead. I still love the ridiculousness of a wooden suit wearing villain.

Layouts are very similar, yet spread out over 2 pages instead of the one. The original page has a myriad of styles vying for attention even a "smashed glass effect". Very cutting edge! The original panel 2 pose is used in the next few pages of the new Bolt story. These new pages also are some of my first ever use of motion blurring.

Changes to 4B2's/Timberr's costume include more barrel styled pants over the paling skirt and a more tree trunk inspired helmet. I sort of miss the bent nail, but figured a good woodworker wouldn't have that.